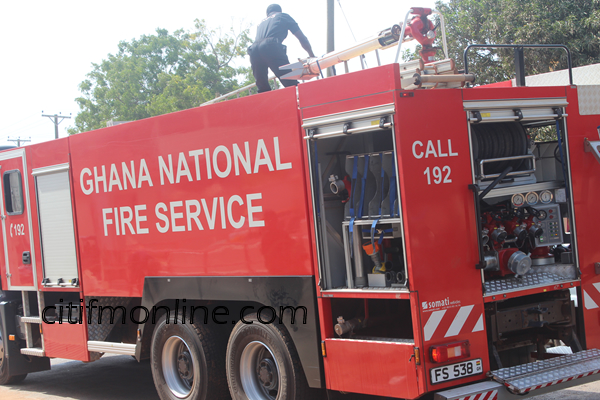 The Ghana National Fire Service (GNFS) is to reduce the country’s emergency fire response from the current average time of 10 minutes to the global standard of five minutes.

In line with that, the service will open 92 more fire stations in strategic areas from now to 2024 in order to bring the service closer to the people.

This is to enable the service to reduce the emergency response time and align its operations to international best practices.

We want to ensure that within four to five minutes, we will be at the point of an incidence,” the Chief Fire Officer, Julius Aalebkure Kuunuor, said in an interview with the Daily Graphic in Accra yesterday.

The service, which currently has 215 fire stations across Ghana, has come under criticism for its late response to fire outbreaks.

Kuunuor said when fire stations were closer to the people, fire outbreaks could be dealt with expeditiously, as the distance between the stations and the points of incidence would shorten.

He said as part of the retooling efforts, the service hoped to take delivery of a helicopter later this year for search-and-rescue operations and firefighting in high-rise buildings, for which reason it had trained three fire pilots on standby, in readiness for the arrival of the helicopter.

Kuunuor said the government would, later this year, commission two hydraulic platforms that could reach the 16th floor of high-rise buildings to fight fire.

Ghana will be the second country in Africa, after South Africa, to have the facility to be used for rescue and firefighting in high-rise buildings,” he said.

The Chief Fire Officer expressed the hope that the provision of additional fire stations across the country would reduce the emergency response time and bring the service closer to the people.

By the end of 2024, we will have 312 fire stations across the country, from the current 215, and that will help us respond to fire outbreaks very quickly,” he said.

The Upper East region was expected to have six more fire stations, while the Central, Oti, and Bono East regions would each have four more, he added.

With a uniform staff strength of 12,862, he said, the service had plans to recruit an additional 2,000 people every year in order to get closer to the global standard of one fireman to 800 people.

With Ghana’s current population of 30 million people, the ratio of fireman to citizens is one to 3,400 people, which leaves a deficit of more than 27,000 firemen to be filled to meet the acceptable global standard.

Our staff strength should have been 35,000 with our current population of over 30 million, so we have the approval of the government to recruit 2,000 staff every year to make up for the deficit,” Kuunuor said.

According to him, the service was expected to take delivery of 168 fire appliances by the end of the year to boost its operations as part of the retooling exercise.

The GNFS currently has about 193 fire appliances.