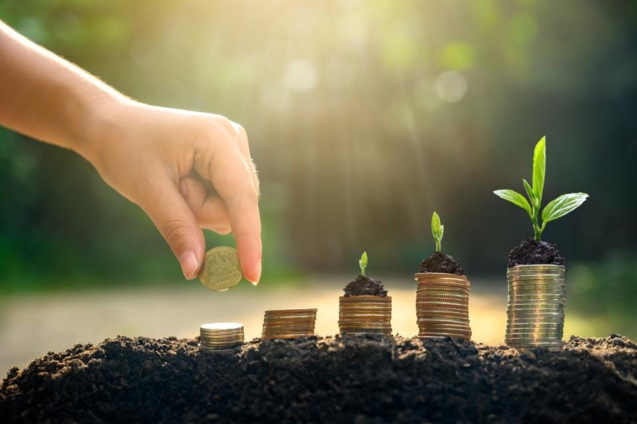 I am of utmost certainty that everyone would love to be financially independent. A resounding ‘yes’ is the answer I would get if I were to go round asking “who wants to be independent financially?” Such is the burning desire!

Financial Independence simply means one would have gotten to the point where he or she would not have to work to sustain their living expenses. Financial independence does not mean an individual will necessarily stop working.  A financially independent person may decide to work or not. The decision to work is usually because they WANT to and not because they MUST. Big difference.

Financial independence is achieved if a person has accumulated enough wealth to generate enough passive income to take care of all living expenses. For instance, if one’s living expenses sums up to GHS 10,000, an investment of GHS750,000 by that person at an interest rate of 16% per annum will be able to fund the living expenses.  That is because the investment would be bringing in a monthly interest of GHS10,000.

Financial independence may vary from person to person depending on their standard of living and all the things they include in their living expenses. Bottom line is, whatever you decide as your acceptable living expense, being able to fund it without needing a job or external support classifies you as being financially independent.

It is largely thought or perceived that the more money you earn, the closer you are to becoming financially independent. This perception may not always be entirely true, and I will tell you why. Admittedly, the more you earn, the higher your ability to accumulate and grow your wealth. Why then am I not on Despite’s level yet, despite proclamations I made early in my career as an accounts officer?

Working as an accounts officer has its perks!  From flexing your muscles when you have to prepare out of station allowances for your colleagues to paying out petty cash to expectant colleagues on a Friday afternoon. You almost feel like a mini god during those times. It also has its nuisance however, like almost every other thing in this world!

One of the things that intrigued me was working on payroll. You saw everything and knew everyone’s level! It demoralized you at times and it encouraged you at other times. I worked as an accounts officer many years ago in a Savings and Loans Company; probably the biggest in the country.

Seeing some of the salaries some of the top executives were on almost knocked me out.  As a fresh graduate from school, I could not believe people were paid so much money! Worst of all, they were to use it for only 30 days!  Incredible right? Maybe not.

I said to myself time without number that if I were to ever receive such salaries, Ghana could not contain me, Mr. Osei Kwame Despite would not be my mate on any level. I would be so rich because how on earth was I going to spend all that money in 30 days? I was so naïve.

God has a great sense of humor, especially when it comes to me.  Fast forward to a few years after that, I started earning similar amounts in terms of salary, albeit in a different company. One year passed, two years came and then three! And here I was, I was no Despite, not even close!

The closest I came to him was probably speaking on his radio station a few times. On some nights when everything was eerily quiet, I would hear a still small voice say teasingly to me very audibly, “Ei Koo Despite, how far?”. Dear God, it’s ok wai.

One day, a very beautiful lady I liked very much came to visit me at home.  It excited me greatly because I absolutely adored her.  She happens to be my wife now. I did not adore the woman down the road that day though. Something I find very funny today happened that day. I went to see her off a bit later in the afternoon.

There was this woman who sold gari and beans, popularly known as gob3 (all the legends know this). That food was and is a life saver for many, including myself. When we got to her place, she put her head out through her small window and shouted, “Customer, I haven’t seen you in a while ooo”.  I developed a stiff neck! “Who is your customer? … Me? … Why are my enemies after me today of all days?”

My lady friend laughed and prompted me that the woman was calling me. Asem b3n koraa nie! (what matter is this?).  We still laugh over that incident. Sometimes she calls me ‘customer customer.’

The woman was so right in calling me out. I had not gone there in a long while. I used to go there like I had shares in the business. In fact, she knew all the combinations I used to buy. She would see me from afar and prepare my pack exactly the way I wanted it. Plenty gari, hard plantain and pear on good days. Top savior!

I had stopped going because my level had changed. I would stay in and order food or sometimes drive out and head to the fanciest restaurant in town.  Everything about the way I spent my money had changed. From the clothes I wore to the food I ate to the car I drove. Almost everything had changed. Simply put, operation Despite was never going to happen at that rate.

Around the same period of my life, a friend of mine got a job in one of the oil firms in Accra. He was put on a salary of GHS16,000 a month plus other benefits. I was so happy for my guy. He had made it! About 7 months down the line, I spoke with this same friend of mine and he complained of hardship.

I was confused! How is that even possible? A single young man on a salary of GHS16,000 is struggling? Further probe into the matter made me realize that my friend was now living like a big boy. He had picked up a mortgage close to Labone, bought a big engine car and was living just like his new colleagues at work.

The above examples are typical of the monster that I call ‘Lifestyle Inflation’. More often than not, we tend to increase our expenses to match our growing income levels. Income moves two levels up, expense inflates itself quickly to catch up, as though it is a 100m race.

In some cases, our desire to spend to match our income levels leads to spending more than we earn. In the book by George S. Clason titled “The Richest Man in Babylon”, the richest man according to the book was a man named Arkad.  Arkad made a quote which I find quite profound; “What each of us call necessary expenses will always grow to equal our income unless we protest to the contrary ”.

Financial independence will only happen if we are able to accumulate and grow wealth over a period. How we think that is going to happen if we keep matching our expenses to our income is a something that is difficult to comprehend.

The need to constantly engage in lifestyle inflation is mostly down to peer pressure. If I had not become an investment advisor, I would not have known that peer pressure was so profound in adults. Many people just want to keep up. A lot of people want to appear rich and not actually be rich. I have too many examples to share.

A young man came to me for advice. He was in a financial mess! It was sad seeing him so desperate and hopeless.  What was even more sad was the car he drove. He drove a big car with a big engine. His budget showed that he could barely fuel the car every month. I asked why he still drives that car instead of a smaller one.

He said to me quite worryingly, “everyone in my office drives something similar”. One of the dangers with lifestyle inflation is things that we used to call luxuries can easily grow to become necessities.

Too many people spend money they haven’t earned, to buy things they don’t want, to impress people they don’t like ” -Will Smith.  We must avoid the temptation of lifestyle inflation with all our might. If you are ever caught in the trap of peer pressure, use what I call Nathan’s Law!

I have two sons. The first boy is 1 year, 7 months old and the second is a little over 3 months old (may you have twins if you said eii). I play hide and seek with my first boy a lot lately. I will say hide and he will quickly run to hide behind one of the sofas at the hall. I will then look around for a few minutes, jump in front of him and say, “I have found you!”. He would be all hysterical and we will do this over and over.

These days, I am unable to find him again. Nathan has found a very interesting way to beat me at the game. What he does now is that anytime I find him and scream, he will simply cover his eyes. As simple as that! I have seen him, but he hasn’t seen me so technically, I haven’t found him. Brilliant!

That’s what we should be doing. We should go about life with our hands covering our eyes. Our peers can find us all they want but we should not see them.

The focus should solely be on us because the goal is to be rich and not to look rich. Financial independence will be achieved but at some cost. We cannot continuously spend everything we earn and expect to build wealth enough to cater for our living expenses in the long run.

We must become conscious spenders. We must spend less than we earn. We must be deliberate in setting aside portions of our earnings for investment. We must be consistent in doing this without fail. We must not fall into the trap of thinking that financial independence will happen by chance.

It is only when we do these things that the goal of becoming financially independent will become the reality that we so crave. The good news is, financial Independence is totally achievable!

He is the Head of Corporate, EDC Investments Limited.