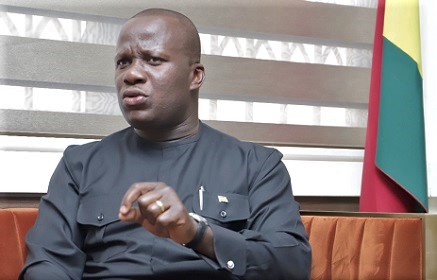 The Minister of Lands and Natural Resources, Samuel Abu Jinapor, has been nominated as the co-Chair of the Forests and Climate Leaders Partnership (FCLP), with a call on global leaders to use the ongoing United Nations (UN) Conference on Climate Change (COP27) as a rallying point for prompt action to protect forest resources and address the climate crisis.

The FCLP is a political forum set up to enable governments and strategic partners to work together to implement solutions to reduce forest loss and land degradation.

Co-chairing the FCLP with the United States Special Presidential Envoy on Climate, Senator John Kerry, the minister said the time had come for concrete climate actions, including sustainable finance options, to deal with the menace.

We are at a stage in the climate struggle where mere talk, commitments, declarations and pledges are not enough. Consistent with the clarion call of COP27, this is the time the world must walk the talk and get on with the action and the implementation of many years of unfulfilled climate action promises,” he said.

He stressed that actors in the global polity had a huge responsibility to act with a sense of urgency to save the planet.

Speaking at an event held at Ghana’s Pavilion in Sharm El-Sheikh, where COP27 is ongoing, Jinapor also underscored the need for the conference to develop a strategic outlook on how countries could work together to limit global warming to 1.5°C targets set out in the Paris Agreement.

Already, we have missed the $100 billion climate finance pledge made in Copenhagen 13 years ago. We, therefore, have to work together to bridge the financing gap between ambition and action. We must find the means of securing funding and strategic collaboration to scale up nature-based solutions to climate change, particularly, in tropical African counties,” he added.

Jinapor said it was important to prioritise the climate financing regime for Africa because the continent bore the brunt of climate change consequences, although it was the least contributor to emissions.

The minister assured the global community that while he remained co-chair of the FCLP, he would work with members of the partnership and other global leaders to protect and restore forests to ensure sustainable land use.

Touching on climate actions being taken in Ghana, he said the government had prioritised forest protection and restoration, which was why a number of projects and programmes had been implemented to tackle the drivers of deforestation and contribute to the global climate action.

For instance, he said, under the Ghana Cocoa Forest REDD+ Programme, which was launched in 2019, climate-smart cocoa practices such as incorporating shade trees on farms, irrigation, application of organic fertilisers and the provision of alternative livelihood options for cocoa communities had been implemented to reduce forest degradation and deforestation, leading to cocoa expansion.

Again, he said, the Shea Landscape Emission Reduction Project had been implemented by the government and was targeted at reducing forest degradation and deforestation in the Savannah zone, restoring shea parklands and ensuring the sustainable supply of shea along the value chain.

These two programmes have the capacity to reduce emissions by 16 million tonnes of carbon dioxide equivalent (tCO2e) within seven years,” he said.

Jinapor also said a total of 547,891.70 hectares of degraded forest lands were cultivated between 2017 and 2021 under the Ghana Forest Plantation strategy initiative.

He also said the Green Ghana project, which saw the planting of 31 million trees in two years; the Ghana Landscape Restoration and Small-scale Mining Project and the National Alternative Employment and Livelihood Programme (NAELP) were all climate actions taken locally to restore degraded forests.

The minister added that the targeted forest restoration programmes were strategic because although Ghana’s contribution to global emissions was estimated at 0.04 per cent, over 50 per cent of those emissions emanated from agriculture, forestry and land use activities.

He observed that despite the modest success that had been chalked up in terms of lowering emissions in the forestry sector, there was more work to be done, especially so when illegal mining, illegal logging and other destructive human activities continued to harm forest and land resources.

He said the World Bank would strengthen its partnership with governments, civil society organisations and local communities to ensure that climate adaptation and mitigation interventions made the desired impact.

For his part, a Principal Policy and Technical Advisor at United Nations Development Programme (UNDP) Climate and Forests, Tim Clairs, said it was important for countries to step up efforts to sustainably manage forest resources.