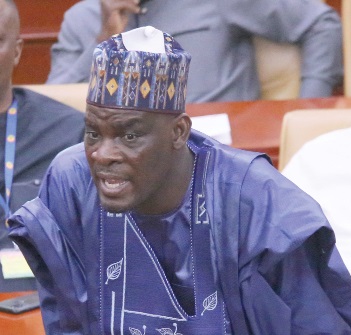 The Minority in Parliament has described the President’s State of the Nation Address (SONA) as not reflecting the true hardships and sufferings facing Ghanaians presently.

Seconding the motion for the House to adjourn after the President had delivered the SONA on the floor of Parliament, the Minority Leader, Haruna Iddrisu, said with the rising cost of living that had affected the prices of fuel, foodstuffs and services, the President downplayed the harsh reality of the Ghanaian economy during his address.

We expected the President to deliver the true state of the nation address which would reflect the growing hardships and sufferings of Ghanaians,” he said.

Iddrisu said regrettably, the President did not have the confidence to talk about the economy.

So he is continuing with his promises and slogans, but as a constitutional imperative, we the Minority are ready to debate our Majority counterparts and prove a credible alternative government, led by former President John Mahama.

“So, Mr Speaker, with our President wilfully downplaying the hardships, I beg to second the motion for adjournment, ” he said.

After President Akufo-Addo had presented the SONA, the Majority Leader, Osei Kyei-Mensah-Bonsu, moved the motion to adjourn sitting, and the National Anthem was played to signal the end of the event.

However, when the military brass band concluded the performance, the Minority side, who were earlier chanting, resumed, singing out the last stanza of the anthem: “And help us to resist oppressor’s rule – With all our will and might for evermore.”

In a reaction, the Deputy Majority Leader, Alexander Afenyo-Markin, said the President had been very sincere and clear with the facts, as he had admitted the challenges in the economy.

He said President Akufo-Addo had said the things Ghanaians were well aware of.

He, therefore, called on all Ghanaians to work together to help surmount the challenges facing the economy.

Afenyo-Markin added that the President demonstrated competence and capacity to be able to resolve the issues that confronted the nation.

For me, the main issue is that he came to Parliament to deliver the State of the Nation Address, not to do propaganda,” Mr Afenyo-Markin, who is also the NPP MP for Effutu, said.

He added that he was not surprised by the Minority’s reaction to the SONA delivered by the President.

You should be well aware that we are politicians and others will disagree with him,” he said.

The NPP MP for Kwesimintsim, Dr Prince Hamidu Armah, said the President outlined his commitment to improve healthcare delivery in the country.

Read also: Government may not pay salaries in the next 3 months – Bagbin

He said the government’s decisions had been apt in addressing the ravages brought about by the COVID-19.

He said the swift and specific policy interventions and policy decisions that were made addressed, to a large extent, the impact of COVID-19 on the people.

He added that the incentives given to frontline health workers, the PPE that was procured, the restrictive and preventive measures that were put in place went a long way to control the pandemic.

These interventions have had a significant impact,” he said.

Before all these, the members of the Majority side displayed their singing skills on the floor of Parliament as they sang the popular birthday tune in celebration of the President’s birthday which fell last Tuesday (March 29).

The Majority MPs, most of who wore all-white apparel, rose from their seats and sang to the President, who celebrated his 78th birthday.

These actions from both sides of the House made the occasion lively to the amusement of some visitors who sat at the public gallery.

Among the guests who were in the House to listen to the SONA were members of the diplomatic community, the country’s development partners, civil society organisations and members of the Council of State, led by their Chairman, Nana Otuo Siriboe II.