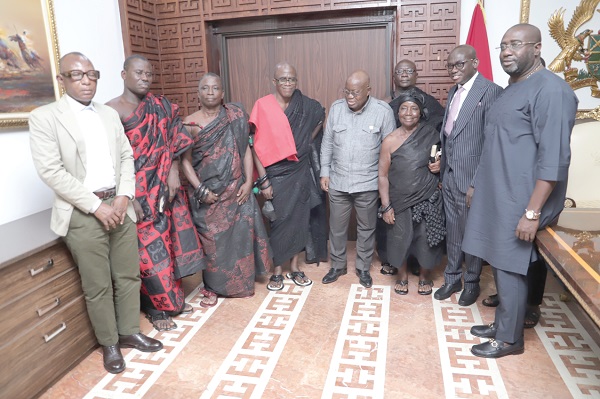 Negotiations are almost complete to enable the Board of Directors of the Komenda Sugar Factory to acquire 20,000 acres of land suitable for growing sugar cane at Wassa Fiase for the production of sugar.

While that is ongoing, there is also an ongoing process to identify outgrowers who will supply the factory with the raw material, so that it can effectively start operations.

At a meeting with a delegation of the chiefs and the elders of the Komenda Traditional Area at the Jubilee House yesterday, President Nana Addo Dankwa Akufo-Addo said the Indian investor working on the sugar factory had indicated that it would commence production processes by April this year.

The President also said ongoing civil works would be completed by March.

Led by the acting President of the Komenda Traditional Area, Nana Kwohin V, the delegation was at the Presidency to say thank you to President Akufo-Addo for his support during the funeral rites of the late Omanhen of the traditional area, Nana Kodjo Kru II.

President Akufo-Addo noted that the civil works were expected to be completed by March this year, and that according to the Indian investor, production would begin in April.

“It has become a big issue in the country. Some people say they completed it, but checks indicate that they did not. But by the grace of God, you have seen that work is on track and we know that production will start in April,” he stated.

He urged the people of Komenda to vote for the NPP in the next election, adding: “You have voted one way for far too long, without getting anything out of it.”

Nana Kwohin, who is also a board member of the Komenda Sugar Factory, confirmed the negotiations for the land at Wassa Fiase.

He indicated that they had seen some civil works going on at the factory, with over 50 people working to put the place in order for the commencement of operations.

The acting president noted that the people of Komenda had thought that because the factory was not a manifesto promise of the NPP, the President and his government were going to abandon it.

However, to our amazement and surprise, President Akufo-Addo has put in place far-reaching measures to ensure that production commences and is sustained for the benefit of the people of the area and the country in general,” he emphasised.

Nana Kwohin said the original 5,000 acres of land for outgrowers to cultivate sugar cane for production was currently not suitable, especially with the number of encroachers on the land, including a university.

He said recently they had seen signboards erected by the Lands Commission warning people to stay off the land because it was state land and pleaded with the President to revoke Executive Instrument 47 of 1976 which acquired the land because it could not be used for sugar cane production.

Nana Kwohin indicated that the chiefs of Wassa Fiase had agreed to give the factory a large tract of land for the production of sugar cane to feed the factory.

He commended the President for the construction of the sea defence wall which had also created a wharf capable of landing over 200 canoes for the fishermen who, hitherto, had to make dangerous journeys to Elmina and other places.

He also expressed the gratitude of the chiefs and the people to the President for the construction of a concrete bridge between British Komenda and Dutch Komenda which had eased transportation.

Nana Kwohin noted that the construction of an access road to the town and the factory would require the demolition of some buildings and assured the government that the chiefs would provide land for the relocation of those affected and appealed for compensation for them.

Life may actually flash before your eyes on death – new study