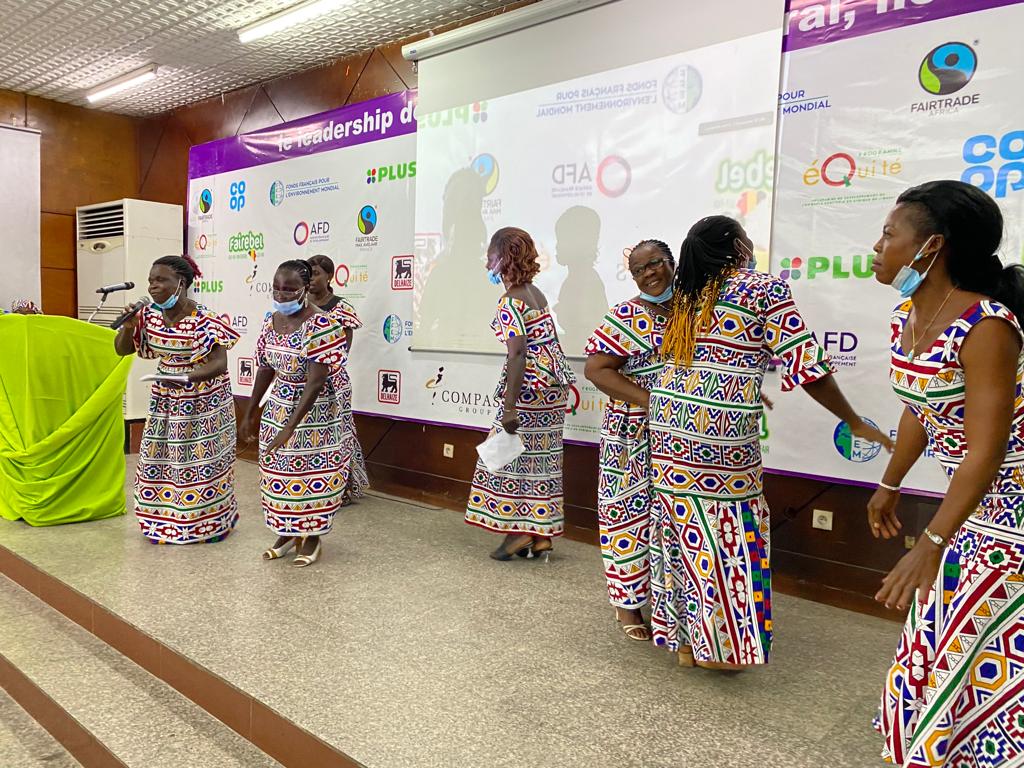 Fairtrade Africa has held a graduation ceremony for its Women School of Leadership programme in Cote d’Ivoire. The event took place on 10th December and was preceded by a final workshop on December 9, 2021, to review and learn from the programme’s implementation activities over the past nine months.

The graduation ceremony was held to present the immediate results of the 1st phase of implementation of the Women’s School of Leadership under the Equity 2 Programme and to celebrate the beneficiaries through the awarding of certificates to mark the end of their learning process. During this event, each group of beneficiaries from each of the seven Fairtrade certified Producer Organisations involved in the project presented and defended an income-generating activity project to be implemented in their communities

The Women’s School of Leadership (WSOL) is a training, mentoring and coaching programme aimed at improving participants’ basic leadership skills and application of human rights provisions on gender issues in their own environment.

Through the training, women are empowered to decide on their future through increased capacity to make decisions and take action on themselves; take control and manage resources by being supported to actively participate and voluntarily assume leadership roles in their Producer Organisations and communities.

The project was developed by Fairtrade Africa, and is dedicated to women and men from various Fairtrade certified producer organizations in cocoa producing communities in Côte d’Ivoire. Since 2017, it has been helping to build the capacity of women and men in a number of areas, covering topics such as personal development, gender, leadership, income diversification, Project management, strategic negotiation, financial management and entrepreneurship.

Between 2021 and 2025, a total of 144 women and men from 14 Fairtrade certified cocoa cooperatives in Côte d’Ivoire will be trained. At the end of the course, they will be real relays of knowledge and good practices aimed at reducing gender inequalities through training for several thousand women in their respective communities.

In 2020-2021, for this first edition of the project, under the Equity 2 Programme, the school is targeting 43 women and 17 men within 07 Fairtrade certified producer organizations (POs) spread over the South-West and South-East zones of Côte d’Ivoire in order to strengthen women’s participation and leadership in the management of their communities, their organizations and their households.

According to research by the African Development Bank1, women make up almost half of the cocoa workforce in West Africa and are involved in almost all stages of cocoa production. In Côte d’Ivoire, women represent 68% of the active cocoa farming workforce (as owners or workers).

They are therefore essential to the sustainability of the entire cocoa industry. Although cocoa is perceived as a male crop, in all cocoa-producing countries, women play an essential role as cocoa producers in the cocoa fields, in the homes, where they feed and support family members; and in the cocoa farming communities that supply local markets.

Despite this essential role that women play in cocoa production, their needs as cocoa producers are not being met. Indeed, less than 5% of agricultural extension services reach women, only 15% of extension staff are women. Women receive only 10% of loans to smallholders. Women are 30-40% less likely than men to have access to essential agricultural inputs.

In addition, in the case of smallholder farms, women and girls often work as unpaid farm workers on family farms and have little control over the income from the sale of cocoa. They represent a large proportion of the often ‘invisible’ ‘hidden’ family workers and are therefore excluded from labour force data and/or services.

In his address, Diarrassouba said empowering women was critical to social and national development. “We must commit ourselves collectively and individually to empower women whiles we adopt a zero tolerance for gender- based violence, in order to ensure a prosperous, just and non-discriminatory Côte d’Ivoire, where women, girls and children can thrive”, she added.

Speaking at the event, Dr. Nyagoy Nyong’o, the CEO of Fairtrade International, mentioned that the Women’s School of Leadership has become a mainstay of gender equity education and women’s empowerment efforts among West African cocoa producers.

The WSOL helps build the capacity of both women and men in areas ranging from personal development and leadership to financial management and entrepreneurship which are all key skills for success”, she added.

Also speaking at the event, Madeline Muga, the Strategy and Impact Director at Fairtrade Africa, remarked that the role of women in the agricultural value chain and supply chain is very critical, and programmes such as these are very fundamental to not only helping build the leadership capabilities of women, but also in setting them on a part to being resilient and self- reliant in challenges times.

In his remarks, Edward Akapire, Head of Fairtrade Africa West Africa Region, emphasized the support that Fairtrade Africa continues to provide to women producers through the WSOL programme and called on the partner agencies to continue in the partnership as scale up efforts continue for the next phase of training the cohorts.

As Gender Champion for the Region, Anne Marie Yao, Regional Product Manager, was pleased with the progress that has been chalked by the project over the years, and the significant contribution the women farmers trained in the programme have made in their own communities.

Dr. Nana Oppong, 2 Others Honoured by Distinguished Scholars of Africa