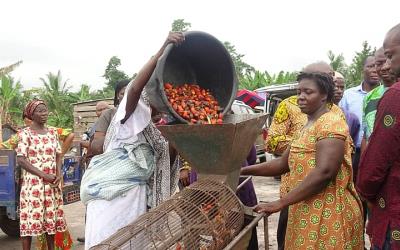 The Oil Palm Development Association of Ghana (OPDAG) has called on the Government to immediately  reconsider its decision to indefinitely suspend the review of the 50 per cent benchmark reduction policy.

The Association said it heard the threats and false claims of the importers that consumers would face astronomical price increases after the review of the policy, which would bring hardship to Ghanaians.

A statement issued and signed by Selorm Quame, the Executive Secretary,  OPDAG, said such claims were false as the arithmetic did not prove so.

the government, through the Ghana Revenue Authority, announced an indefinite suspension of the review of the benchmark reduction policy with agitation from GUTA.

It said prices of good manufactured in Ghana would not see such price as had been portrayed by the Public Relations machinery of the importers to incite the  people against this critical decision that faced the nation.

It said initiatives such as Planting for Food and Jobs, Planting for Export and Rural Development were all initiatives that would not thrive under this strategy that subsidized imports while maintaining stiffer conditions under which local industry must operate of which the oil palm sector of Ghana was not an exception.

It is important to note that what faces us now is a big choice between the source of your livelihood of over 24,000 persons who depend on the productivity of the entire value chain of the oil palm sector of Ghana from the plantations to edible oil refineries for their livelihood and the profits of the few importers of edible oil products into Ghana,” it said.

It said the oil palm sector faced a calamitous situation currently and thousands of jobs would be lost if this suspension lingered on into this new year.

The Association indicated that it found the proposed government engagement with stakeholders worrying and intriguing.

It said this was because for two years government had been engaging with all relevant stakeholders consistently and  had made their case on numerous occasions over the past two years.

We have been heard by the President, the Economic Management Team and  all the relevant government agencies such as the Ministry of Trade and Industry, Ministry of Food and Agriculture, Ministry of Finance the Ghana International Trade Commission but unfortunately the status quo has remained,” the statement said.

It said some Oil Palm manufacturing organizations such as the refineries had been through very challenging times with employee numbers due to low productivity occasioned by the influx of cheap imported finished oil palm products.

Over 500 temporary jobs have already been lost and further downsizing the staff numbers remains the only short term option to save the plants.

The statement said closures were imminent in a few months from now, if the situation of a takeover by imports remained the same.

We are sad to inform you that the two major oil refineries Wilmar Africa and Avnash Industries have currently shut down their refineries due to low demand. It a matter of weeks, the impact of this situation will hit our member companies in the plantation and oil mill subsector of the chain,” it added.

It said these large refineries have only survived the past two years due to exports opportunities they developed within the ECOWAS region.

These opportunities however are all lost now as these destination countries have also taken steps to empower local production of oil palm products to create jobs and reduce imports to save their economies.

It said since the introduction of the policy, their plea and advice to government had always been to exempt oil palm products from the policy because local processing capacity outweighed local demand by 10 per cent; a situation that offered Ghana the opportunity to produce oil palm products for exports to earn foreign exchange.

The statement said the Association faced huge job losses and hardships to employees and entrepreneurs in the palm oil sector if the Government did not reconsider the implementation of the review of this Benchmark Reduction Policy.

It called on Ghanaians and stakeholder groups such as the Employers Association of Ghana, the Ministry of Labour and Employment Relations, the TUC, GAWU, ICU and GUTA to support their call to save the sector from collapse.

Indeed, industrialization is a difficult path to choose in developing our economy as it remains a long term goal but we ought to pay the price now to save our economy and create the much needed jobs for the growing youthful population of Ghanaians,” it added.

2021: Bank executives that left and entered