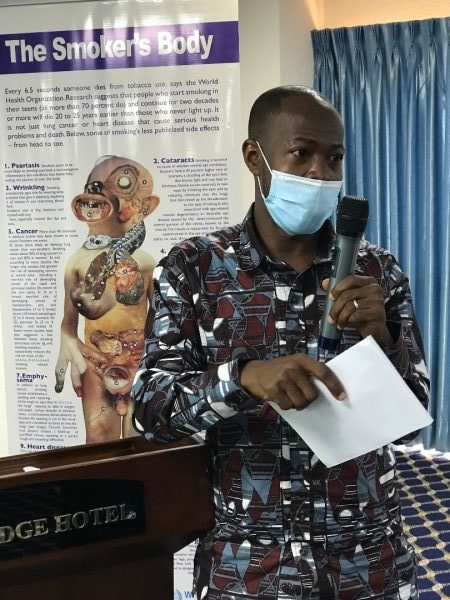 “The true face of smoking is disease, death and horror – not the glamour and sophistication the pushers in the tobacco industry try to portray” – David Byrne

Tobacco consumption is a threat to lives and livelihoods which compromises the health and prosperity of both developed and developing nations. In Ghana, tobacco-related deaths exceed 5000 annually and its associated annual economic burden is estimated at GHc 97 million, which makes tobacco a public health and economic threat. The World Health Organization (WHO) recognizes tax price policies as one of the most effective strategies for combating the tobacco pandemic by reducing demand for tobacco products, while also being a reliable source of revenue for development.

Mr. Labram Musah, Executive Director of Programs at the Vision for Alternative Development (VALD), hinted that, “tobacco taxation is underutilized in Ghana, thereby making it affordable and accessible to all, including children”.

He further explained that, VALD, with support from the Tax Justice Network Africa (TJNA), has facilitated a study on the Economics of Tobacco Taxation in Ghana which will undoubtedly provide evidence-based insight into the nature of Ghana’s tobacco tax and price structure. This he believes will go a long way to curb these challenges tobacco consumption possess.

Labram revealed that, the study report is scheduled to be launched on the 25th of January, 2022.

“This press launch is a collaborative effort between the Vision for Alternative Development and the Ghana Revenue Authority with support from the Tax Justice Network Africa to share key highlights of the study, which will be followed by a stakeholders meeting on the 26th of January respectively”. He added

He called on policymakers, advocates and the media to have a shared understanding of the potential role that tobacco taxes can play in reducing tobacco use, improving health and mobilizing domestic resources within the broader lens of tax justice.