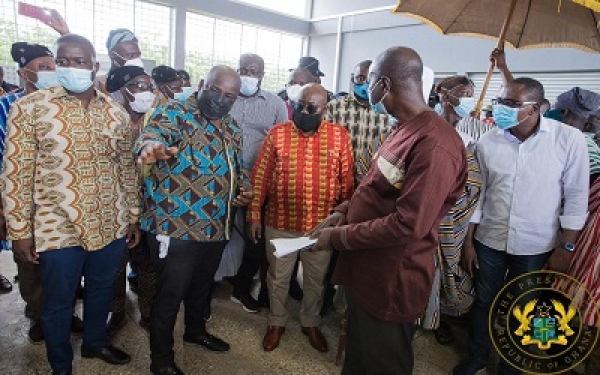 The total cost of the two projects commissioned is GH₵13.34 million.

President Akufo-Addo commissioned the GH₵7.3 million Savelugu rice processing factory, which has a state-of-the-art rice facility, with the capacity to produce between 1.5 and 2.8 tonnes of processed rice per hour.

The processing plants installed at the factory include modern parboiling, milling and packaging plants.

It has a standby generator plant and a mechanised borehole to supply the facility with water.

It also has a fully furnished office accommodation for staff, a conference room, laboratory, and a canteen/kitchen.

118 people to be employed

President Akufo-Addo was told that the factory would employ about 118 people, including management professionals, factory floor workers and plantation workers who would work on a nucleus rice farm.

With funding from the African Development Bank, the Rural Enterprises Programme (REP) has established five of these common user facilities nationwide.

4 Other Technology Solution Centre
The other four are located at Kumawu in the Ashanti Region, Hohoe in the Volta Region, Elmina in the Central Region, and Dormaa Ahenkro in the Bono Region.

The five new technology solution centres are an upgraded version of and an addition to the original 26 Rural Technology Facilities (RTFs) established by Rural Enterprises Programme across the country in collaboration with GRATIS and the host district assemblies.

The Technology Solution Centres are set up to support the government’s industrialisation agenda, particularly the 1D1F initiative.

The key functions include production of spare parts and repair services for district factories and the oil & gas industry, manufacturing of agro-processing equipment, and providing training for human resource capacity building.

To enhance the increased number of trainees, hostel facilities have been provided for both males and females at five of the older TSCs, and to admit trainees from within and outside the districts/municipalities they are located

As part of the tour, President Akufo-Addo also inspected ongoing work on the two-tier Tamale interchange.

Director of the Department of Urban Roads, Alhaji Abass Awolu, who took President Akufo-Addo on a tour of the project, the Tamale interchange, which is a two-tier interchange, with a total length of one kilometres bridge and ramps, and 5km of ancillary road works, is 80% complete.

The interchange, the Director of Urban Roads said, has 19 spans, out of which 13 spans and the ramps have all been completed, with work currently ongoing on the next six spans.

6 spans to be completed in 6 months

The completion of the six spans are expected to be completed in the next three months, with ancillary works, mainly asphalting, street lighting and road safety works, all to be completed before the end of 2021.

In assuring the President of the completion of the project before the end of the year, Alhaji Awolu noted that the contractor, M/S SinoHydro, is using two teams to undertake the works, with one team working from the Dakpema’s palace section and the other working from the Bolgatanga road section.

The Tamale interchange is an integral part of comprehensive measures put in place by the Akufo-Addo government to address the issues of congestion in urban centres, and to help improve travel times on major arterial roads.

Other interchanges being constructed

Other interchanges being constructed include the PTC roundabout interchange in Takoradi; the Nungua interchange, which is part of the La Beach Road Completion Project; the Adjringanor overpass, where ongoing works will be completed by the first quarter of 2022; and phase II of the Tema Motorway interchange.

The Tema Steelworks Road, the only concrete road to be constructed by government since the Accra-Tema motorway, has also been completed. Similar works are also being undertaken within the Tema industrial enclave.

The Legon/Adjringanor roads, aimed at improving travel time within that corridor, are 52% complete; the Kumasi Roads and Drainage Extension Project, which includes the dualisation of the Lake Road; and lining of the Sissai River Drain in Kumasi, is  75% complete; and the Teshie Link Road, popularly referred to as the LEKMA Road, is 90% complete.

President Akufo-Addo also inspected ongoing work on asphaltic overlays on sections of the road network in Tamale, in the Northern Region.

Construction of 100km of roads

The contract, being undertaken by M/S Queiroz Galvao Konstruktion, will see the construction of 100km of roads within the Northern, North East and Savannah regions.

Work commenced in March 2021 and is expected to be completed by September 2022.

A total of 18 kilometres out of the 40km road network in the Tamale Metropolis has seen the overlay of asphalt, with construction of the remaining 22 kilometres underway.

15km of town roads in Yendi

A total of 15km of town roads in Yendi will also have the construction of asphaltic overlays over them.

President Akufo-Addo also inspected ongoing work on the upgrading of the 30.2km stretch of the Tamale-Daboya road, specifically Tali to Daboya, from a gravel surface to a bituminous surface road.

The works include earthworks to embank the road in low lying areas, construction of drainage structures to ensure that the road is effectively drained and, therefore, does not fail prematurely, paving and surfacing works.

The contract for implementation of the works was awarded to Messrs Maripoma Enterprise Ltd, at the cost of GHȼ119.6 million (GHȼ119,657,337.41) for completion in 36 calendar months.

The project, together with the upcoming Daboya bridge project, would significantly reduce travel time between major towns in the Savannah and Northern regions.

It will also improve access to socioeconomic facilities such as markets, schools, and clinics, which invariably will translate into higher standard of living of the people living in communities along the project corridor.

Ya-Naa Abukari  stated that “the ability to facilitate the performance of the kingdom’s landmark funerals, leading to his enskinment, is a singular achievement that has won you (President Akufo-Addo) great trust in the minds of Ghanaians and Dagombas to be precise.”

As a result of this, the Ya-Naa assured President Akufo-Addo that “the Gbewaa Palace will look forward to working with you in your second term to address the few remaining security threats to the Dagbon Traditional State.

The Dagbon State, under my leadership, will continue to support your government to succeed and provide quality and principled leadership for our region and country to make Ghana a better place.”

Naa Abukari II recognised that “despite the fact that certain individuals continue to undermine your efforts through spoiler behaviours and machinations”, and noted that the Dagbon Traditional Council has put together a development fund highlighting key socio-economic development areas, to enable Dagbon unleash its economic potential for the general economic development of the Kingdom.

Commending the President for his strong leadership during his first term in office, which has culminated in the implementation of many flagship programmes, such as Planting for Food and Jobs, Free SHS and ‘One District, One Factory’ programmes, “these people-centred policies and programmes have won you the admiration of many Ghanaians.”

Whilst commending government for the $30 million Yendi Water Supply Project, he appealed to President Akufo-Addo to urge the relevant water sector agencies and contractors working on the project to speed up the process to end the water crisis in Yendi.

Towards helping to end the water crisis in Yendi, the Ya-Naa applauded the efforts of the Member of Parliament for Yendi Constituency, Alhaji Farouk Aliu Mahama, “for his great and timely intervention in the supply of potable drinking water through the construction of boreholes in some parts of the Eastern Corridor Road.”

Towards combating the threat of desertification, the Ya-Naa indicated that, “I personally have an initiative on afforestation, dubbed ‘Naa Bukali Green Dagbon Project’, which I intend to roll out. This project shall not only help in making Dagbon Kingdom Green again, but also help in greening Ghana in general.”

On his part, President Akufo-Addo thanked the Ya-Naa for the warmth of his reception, adding that “it is a matter of great delight for me to see you sitting on this ancient skin over a united Dagbon. It is something that we have dreamt about for years, but today it is a reality.”

He thanked the Ya-Naa for the work he has done in promoting reconciliation in Dagbon since his enstoolment as overlord of Dagbon, and also expressed his appreciation for the support given him and the New Patriotic Party in the December 2020 elections.

To this end, he told the Ya-Naa that he has taken the decision to appoint the MP for Yendi.
Farouk Aliu Mahama, as Board Chair of the Ghana Integrated Iron and Steel Development Corporation, which has been established to oversee the exploit, develop and transform the iron ore deposits in Sheini and Oppon-Manso.

Let us consolidate the peace in Dagbon – President Akufo-Addo

President Akufo-Addo reinforced government’s enduring commitment to cooperate with all stakeholders towards consolidating the prevailing peace and harmony within the ancient kingdom of Dagbon.

According to the President, “All the assistance that my government provided to enable us to arrive at a settlement in Dagbon, which has brought peace and harmony to this ancient state, will continue to be forthcoming to make sure that we consolidate the peace and harmony that has taken place here”.

In his remarks, the President told the Yoo Naa and his elders that his first port of call at the start of his working visit to the region saw him pay a courtesy call on the overlord of Dagbon, the Ya-Naa, Mahama Abukari II.

“I saw him yesterday sitting in state in Dagbon, which is now united and at peace, after which I went to see your brother, Mahamadu Abdulai, Mion Lana in Mion, and today I am here before you, the three people who are responsible for this historic achievement of peace and reconciliation, and unity in Dagbon”, he said.

He continued, “I intend very soon to announce the participation of both yourself and your brother Mahamadu Abdulai in the work of my government”.

Reiterating government’s focus on technical and vocational education, he told the Yoo Naa that government places a great deal of importance on expanding access to TVET education as it offers “the opportunities for self-employment to increase for our young people.”

To this end, the President pointed out that, “industrial development in the area, of which the rice processing factory is a part, is going to gain even greater momentum here in Savelugu, and I want to put on record my appreciation and gratitude for the 2000 acres of land that you have dedicated to the Ministry of Trade as an industrial park to get industrial activity going here in Savelugu.”

On helping to end the COVID-19 pandemic, the President told the Yoo Naa that government ran into difficulties and supply of COVID-19 vaccines because of the global shortage of vaccines.

[email protected]: Spend a pesewa and win a car