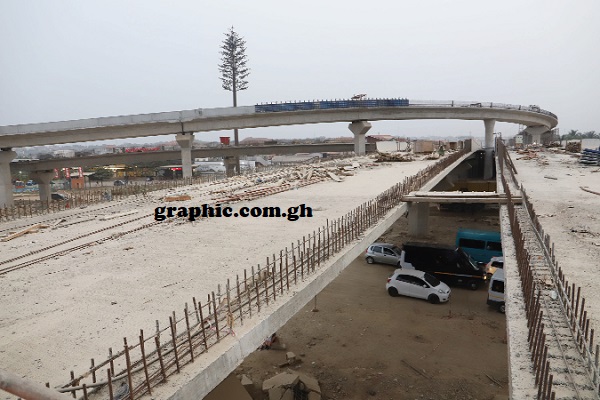 After two years of non-stop work, a three-tier interchange is now visible in the skyline of Nungua Barrier as part of the Accra-Tema Beach Road project.

The beach road project, which begins at the Independence Arch of the Black Star Square in Accra through Osu, La and Teshie to Nungua involves the remodelling of the single carriageway into a dual carriageway, the construction of a bridge at the A-Life Junction at Nungua and the construction of a fresh three-tier interchange at Nungua barrier which is already rising into the skies.

The consultant, Bonne Acquah, told the Daily Graphic yesterday that work on the interchange was 78 per cent complete.

He said the general works, which had been scheduled into three lots, with two of them underway, was also 78 per cent complete.

The project is scheduled to be completed by March this year, but Mr Acquah stated that there were some obstacles concerning compensations that were being revolved by the Department of Urban Roads of the Ministry of Roads and Highways.

If they are able to solve the obstacles, then we are sure to complete the project by March this year, if not, then a few months more,” he said.

One of the concerns of the project consultant was the lack of buffer space along the road for future expansion.

The consulting engineer said that would mean that the government would have to embark on more demolition exercises anytime there was going to be an expansion on the stretch.

Acquah said the Accra-Tema Beach road project route had private properties along it.

The road from Nungua to the Junction Mall has no space at all for expansion and even from Sakumono Village to Tema, the lands belong to private individuals, so there is no space for expansion,” he said.

A Daily Graphic team that monitored the ongoing works and sampled the views of commuters, settlers and business operators along the road gathered that the expansion work was appreciated by some people, but had created discomfort for many others.

Operator of the Abode Car Accessories at Nungua Barrier, Collins Amoah, said the construction works had collapsed businesses operating along the road.

He said sales at the shop had reduced by about 65 per cent since the construction of the interchange started at Nungua Barrier.

Cars or customers cannot come to our shop for months now and that has affected sales of up to 65 per cent because before people coming from Ashaiman, Spintex or Tema could alight here and patronise our goods but now they have to alight at Royal Ravico Hotel.

“So even walking from there to this place is a problem as there are no alternative paths here,” he said.

We just come in the morning and close in the evening with little or no sales,” Mr Amoah added.

To buttress the effect of the construction on sales, an ice cream hawker, Victor Inkoom, told the Daily Graphic that the construction works had destabilised activities at the bus stops on the stretch where he usually made brisk sales.

“Since last year when they started it has affected sales but within the last two months, things have been worse because of the works on the bridge and the dust around the place that prevents people from buying,” he said.

He said he had to move to Junction Mall these days where only few people patronised his products.

The team gathered that while works were ongoing with workers in full flight during the entire three days of monitoring on the La-Nungua stretch, works on the stretch from Advent Press at La towards Osu were yet to start.
It also did not escape the team the absence of street lights on the road, especially after the Labadi Beach Hotel towards Teshie where visibility is poor during the night due to the absence of lighting, although street light poles had been mounted on the stretch.

Road markings were also absent on completed portions of the road from La to Nungua.

The absence of street lights and road markings have rendered the road dangerous to drive on, especially at night.

The team also monitored that some of the buildings close to the road which were earmarked for demolition were still standing, some of them with portions broken.

The sight of partly damaged buildings lined the road, especially around Teshie and Nungua, where some of the homes have been demolished halfway, with some of the rooms still being occupied.

Examples are family or compound houses with a part destroyed and other parts occupied, posing a risk to occupants.

This is despite the fact that the government has paid GH¢3.6 million in compensation to persons affected by the Beach Road Expansion Project to cover buildings and other structures demolished to make way for the project.

The Minister of Roads and Highways, Kwasi Amoako-Attah, told the Daily Graphic during a tour of the road last year that commuters and drivers must bear with the engineers working on the road because every road construction caused some inconvenience.

However, he said, when completed the comfort the road would bring to them would surpass the inconvenience they might have experienced during the construction stage.

Related Topics:Nugua interchange
Up Next