Ghana will join the global community to Commemorate the 2022 World Toilet Day on Saturday the 19th of November, 2022.

The World Toilet Day is observed every year on 19th November by all Member countries of the United Nations.

The purpose of this International Day of Action is to among other things break the taboo around toilets and to raise global awareness on the daily struggle of a staggering 2.5 billion people around the world face in accessing a basic service like toilet.

The commemoration of this day is to unite everybody who is passionate about toilets to ensure that access to improved toilets, which has been declared a Human Right issue by the United Nations General Assembly Resolution A/RES/64/292 on 28th July 2010, becomes a reality for all.

The Ministry of Sanitation and Water Resources is therefore encouraging the media, development partners, the private sector, civil society, politicians and the citizens alike to help sensitise the general public on the need to have a toilet in the house. Over the past years, World Toilet Day has become an important platform to raise awareness, inspire advocacy and demand action from our leadership at all levels.

The theme for this year’s commemoration is “Sanitation and Groundwater” with campaign tag “Making the Invisible Visible”.

According to a press release by the Ministry of Sanitation and Water Resources, this theme was chosen to highlight on the indispensable relationship between Sanitation and Groundwater sources.

It is an undeniable fact that poor management of sanitation by individuals and local government authorities, has led to exposure of faecal matter into the environment and eventually contaminating our groundwater sources. The practicing of open defecation has in no small way also contributed to this state of affairs,” the release stated.

Activities planned by the Ministry to commemorate the day include: 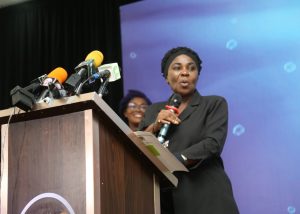 According to the release, the Ministry is committed to its flagship “Toilet for All” Programme in collaboration with all relevant stakeholders and admonishes households to stop open defecation and build their own toilets. The various Metropolitan, Municipal and District Assemblies are also encouraged to enforce their bye-laws on construction of toilets in private and public buildings. Management of our basic schools are to ensure that institutional toilets provided for them are well maintained and made accessible to all pupils and students, whilst school-based health teachers are asked to continuously educate pupils and students on proper use of these toilets.

The Ministry, therefore, appealed to media fraternity, religious and traditional leaders to use their influence in society to sensitise their followers, congregation and subjects respectively to stop open defecation and build their own toilets.

Together we can make universal access to toilet by the SDG end time of 2030 a reality. Wishing you a happy World Toilet Day in advance and remember sanitation is everyone’s business so play your part.”