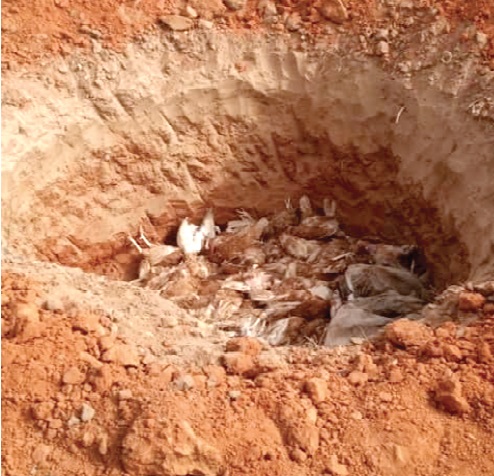 An outbreak of the highly pathogenic Avian Influenza has hit the North East Region, infecting more than 500 birds.

Officials of the Veterinary Services Department (VSD) in the region have since moved in to cull about 500 birds and destroyed a number of crates of eggs at a farm at Nalerigu where the disease was first recorded.

The infected farm has also been fumigated and shut down temporarily.

This is the first outbreak ever recorded in the region, with officials suspecting infected eggs from other regions as the possible source.

The owner of the infected farm, Saaka Latif, told the Daily Graphic that the birds started dying two weeks ago but he did not suspect it was avian influenza, so he was administering antibiotics to them.

According to him, when the mortalities became severe, he reported the incident to the VSD who then confirmed to him that it was the disease after conducting a test.

Last week Tuesday, officials of the Veterinary Services told me it was Avian Influenza, so they are going to destroy them and disinfect the whole farm so that in case I want to restock, I can do so,” he said.

The Regional Veterinary Officer, Dr John Akwasi Ohemeng, in a notice cautioned residents of the area against the consumption of poultry products and transportation of the products out of the region.

He said the department had intensified its surveillance on various farms to identify and control the spread of virus.

Some 55,227 birds have also been culled by the VSD of the ministry.

Last week, the government approved a compensation package of about GH¢44,000,000 to poultry farmers who lost their birds as a result of the recent outbreak of the Avian Influenza across the country.