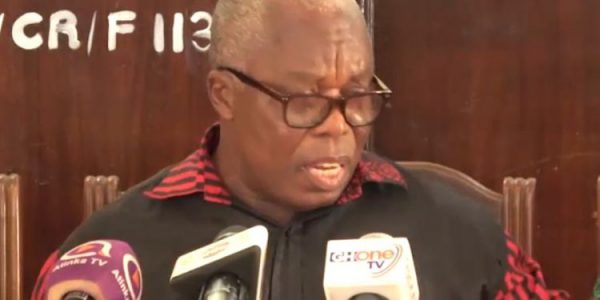 Some groups in the Ashanti Region are threatening to stop the mining of bauxite in the Nyinahin Forest Reserve over what they call lack of transparency by the Ghana Integrated Aluminum Development Corporation (GIADEC) in its dealings with the host communities.

The groups are also calling for the immediate dissolution of the GIADEC Board due to the absence of leaders of the host communities on the recently constituted board.

In January this year, traditional authorities within the Tano-Offin Forest Reserve enclave in a statement accused the corporation of not being transparent as far as plans to mine bauxite in the area were concerned.

Speaking at a news conference in Kumasi, Nana Oti Awere, Spokesperson for a group known as the Asante Kotoko Society, asked GIADEC to be open in its dealings with the people.

“The GIADEC Board is following old fashioned principles to come and destroy our area. We are not going to allow that, so we call on the government to ask GIADEC to withdraw the tender, regardless of how far they have gone. They should withdraw it. We also call on the government to dissolve the board of the Ghana Integrated Aluminum Development Corporation because Asanteman has very little say on the board, and we can’t allow that to happen. If they dare ignore what we are saying, and they come to Nyinahin to mine any bauxite, there will be fireworks,” he said.

Last year, the Ghana Integrated Aluminum Development Corporation downplayed suggestions that the country’s pursuit to mine bauxite reserves in the Atewa Forest will lead to the destruction of three of the country’s water bodies which take their sources from the reserves.

The three rivers, Birim, Densu and Ayensu provide the source of drinking water for more than five million Ghanaians.

Speaking at a press conference, Michael Ansah, GIADEC’s CEO, said mining in the forest reserve will not be carried out close to the three rivers, and as such as concerns that the bauxite mining will endanger them could not be true.

“If you look at the map of the mining concessions, where they [the three rivers] will be, for the Birim and Ayensu, their sources will be about 10 km from the points of these mining, while the Densu’s will be 15 miles away,” he said.

The Atewa forest is part of the Guinean Forests of West Africa which stretch from southern Guinea into eastern Sierra Leone and through Liberia, Côte d’Ivoire and Ghana into western Togo.

Deforestation has massively reduced the size of the forests and the Upper Guinea Forest is now restricted to a number of more or less disconnected reserves and a few national parks acting as man-made refuges for the region’s biodiversity.