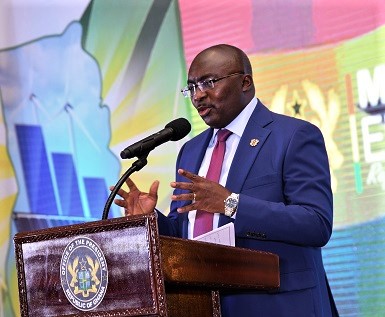 The Vice-President, Dr Mahamudu Bawumia, has said the government is determined to promote the use of renewable energy sources, including gas-based electricity generation systems.

We want to make conscious efforts to ensure the country continues with its development agenda in an environmentally safe and friendly manner that leads to a net zero emissions outcome.

“We shall increase the share of modern renewable energy, solar, waste energy, small and medium hydro power and so on in the national energy mix. We all have to be aware that this transition is going to take place over the next 30 years, but the cost of that transition is being felt today,” he said.

Dr Bawumia, who was addressing the first national energy transition forum in Accra yesterday, added that the government would work towards making the country an energy and e-mobility hub in the West African subregion.

The forum, which was on the theme: “Moving Ghana towards a net-zero future”, became necessary after the inauguration of a national energy transition committee in December last year to prepare a plan to guide the country’s energy transition process.

As part of its activities, the committee is conducting nationwide stakeholder consultations to solicit views from the people, with the Accra forum being the first of such engagements.

We shall also harness the use of our gas resources by expanding gas pipelines to key demand centres across the country and increase access to LPG for cooking in households,” he said.

According to him, nuclear energy was another clean energy source the country could consider, adding: “We will do so by implementing the national energy road map and action plan.”

On the fuel situation, he said lack of funding for oil exploration, coupled with other factors, had led to increases in oil prices globally.

Dr Bawumia said many developing countries were feeling the economic impact of the situation, resulting in inflation of goods and services in those countries.

He, therefore, urged the participants to “set targets of what we must be doing as a country. I hope by the end of the consultations the country will come up with specific targets to be met”.

The Vice-President also called on all to come on board, since, according to him, the energy transition would impact all sectors of the economy.

He further suggested that the consultations be extended to neighbouring countries to incorporate the risks and opportunities the transition offered, adding that ECOWAS must also begin to consult on the need for a sub-regional transition plan based on the visions of respective countries.

The Minister of Transport, Kweku Ofori Asiamah, said 2021 data from the Driver and Vehicle Licensing Authority (DVLA) revealed that out of the about 28 million vehicles registered in the country, about 72 per cent were powered by petrol, with 27 per cent powered by diesel, while less than one per cent used gas and other energy sources.

He said the high dependence on fossil fuel, coupled with factors such as traffic congestion, had made transport the net emitter of greenhouse gases in the country.

According to Asiamah, the ministry was currently developing an e-mobility policy to guide the use of electric vehicles in the country, adding that the ministry would use part of its approved budget to purchase gas and electric buses as a first step.

For his part, the Minister of Environment, Science, Technology and Innovation, Dr Kweku Afriyie, said his outfit had also prepared for the transition process.

He said it would be in the interest of the country to transit to renewable energy due to the advantages that came with its use.

Related Topics:Dr. Bawumiarenewable energy
Up Next