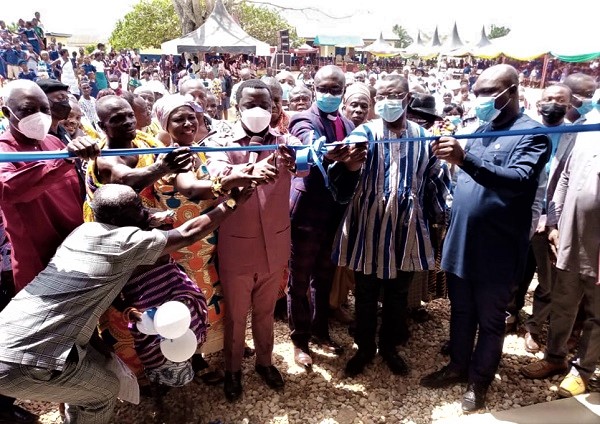 The VALCO Trust Fund and three partners have replaced 17 schools held under trees with permanent, secure school blocks under the fund’s Zero Schools Under Trees Project.

A symbolic general inauguration was held at Abomosu in the Atiwa West District in the Eastern Region last Tuesday, during which a new six-unit classroom block with ancillary facilities was inaugurated for the Abomosu Presbyterian Primary School.

The Abomosu Presby Primary School has a staff common room, a library, an ICT centre, a teachers’ bungalow, a place of convenience and a kitchen.

The classrooms have furniture for pupils and teachers.

All the other classroom blocks built across the country have been provided with similar facilities and connected to the national grid.

It is the vision of the VALCO Trust Fund to construct 5,000 school buildings, estimated to cost GH¢3.5 billion, across the country.

Yeboah said the project was in response to the humiliating conditions children went through to access education.

He gave an assurance that the fund would continue to support “in whichever way possible”.

He indicated that the second batch of schools would be completed in May, with the third batch expected to start in June this year.

Dr. Adam explained that his ministry’s mandate was not to provide only electricity but also educational assistance.

He said the ministry was committed to providing electricity for all the schools and communities at no cost and appealed to government officials, well-meaning individuals and corporate entities to get on board to assist the government realise its goal of developing the country.

Rev. Fordjour said the project was also to realise the government’s aim of getting every child in school and educated, “so that the narrative of schools under trees becomes a thing of the past”.

Related Topics:schoolsVALCO fund
Up Next

AGA pushing for more women in the mining industry