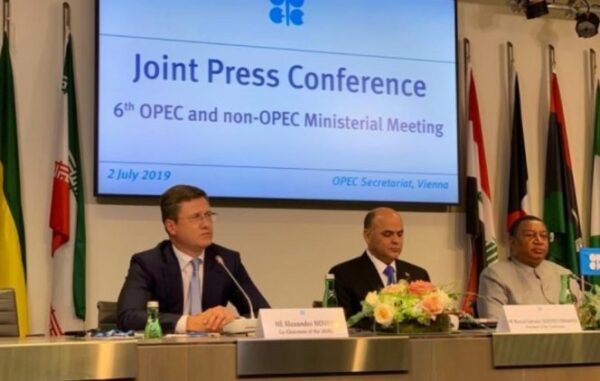 With the global economy “still in deep recession,” the oil market’s struggles may well persist through the first quarter of 2021, requiring OPEC members to remain disciplined and patient, Algeria’s oil minister said Nov. 30, as the producer group opened its meeting to discuss output quotas for the months ahead.

OPEC and nine allies led by Russia have implemented historic production cuts to combat the pandemic-fomented collapse in oil demand. The curbs began at 9.8 million b/d from May, and then were eased to 7.7 million b/d in August as the world economy, particularly in Asia, began to rebound.

They are scheduled to taper again to 5.8 million b/d from January, but struggles to contain COVID-19 infection rates in western countries have stalled the global economic recovery, prompting some ministers, including Algeria’s Abdelmadjid Attar, who holds OPEC’s rotating presidency for 2020, to advocate an extension of the current cuts.

However, optimism over promising trial results for three coronavirus vaccines has buoyed oil prices in recent days to their highest since March, and fatigue among many members to reining in so much of their crude production has been growing.

Read also: We are acting in full compliance with the law- Eni Oil

Attar, in his remarks to open the OPEC meeting, said global deployment of a vaccine would not be likely until the second half of 2021.

We must be aware today that market conditions in 2020 are likely to continue into the first quarter of 2021 and that we must be cautious,” Attar said. “The pandemic continues to rage with cases soaring in many regions around the world. It continues to affect adversely the global economy and consequently the world energy market in an unprecedented manner. The shock for the oil industry is massive and its severe impact will likely reverberate in the years to come.”

Timing the market’s recovery
No other ministers spoke in the portion of the meeting that was publicly livestreamed.

OPEC is hoping to firm up a consensus at its meeting, before Russia and the other allies join the talks Dec. 1. Delegates have said a three or four month extension is in play, which would likely require another meeting in March to reassess and decide on a path forward.

However, preliminary consultations among Saudi Arabia, Russia and seven other countries on a key OPEC+ monitoring committee did not reach any agreement Nov. 29, delegates said. Kazakhstan was said to favor sticking to the original agreement to scale back the cuts, while Russia proposed a gradual increase in quotas.

The UAE, which has privately discussed whether to remain in OPEC long term, had not determined its position, a source told S&P Global Platts.

Traders have long priced in expectations of a cut extension through at least the low seasonal demand period of the first quarter.

Attar cited forecasts from OPEC’s analysis arm that global oil demand would decline by about 9.8 million b/d in 2020, with a second wave of the pandemic weighing on the world economy.

However, he said there was “light at the end of the tunnel,” with oil demand expected to rebound by 6.1 million b/d in 2021.

“We are on the right path,” he told his OPEC counterparts, but “the route to recovery is long and bumpy. It requires patience.”
Source: Platts

Looking back at 2020: Are small holder farmers receiving the needed support?