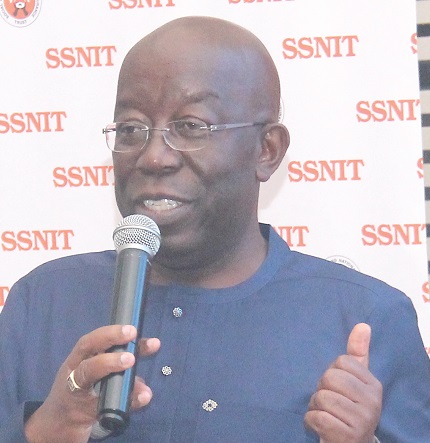 Only 14,314 self-employed workers contribute to the Social Security and National Insurance Trust (SSNIT), representing some 0.8 per cent of the 1.7 million contributors on the scheme.

In all, there are about 11.5 million people in the informal sector in the country.

And as part of measures to reverse this trend, the national pension fund has started engaging stakeholders on ways to expand pension coverage to the self-employed and informal sector workers.

The engagement started in Accra yesterday with some selected state institutions, civil society organisations (CSOs), members of the Parliamentary Select Committee on Employment and Social Welfare and some state enterprises.

It was on the theme: “Expanding pension coverage to the self-employed and informal sector workers.”

The fund will also engage trade unions, creative arts industry players, selected media persons and other segments of the population.

The Director-General of SSNIT, Dr. John Ofori-Tenkorang, said it had become necessary to extend coverage to informal sector workers, not only to increase active membership and contributors to the scheme but also ensure that every worker in the country enjoyed social protection.

We have about 11.5 million people in the informal sector, out of which we have only 14,314, which is very minimal,” he said.

According to him, as of January 2022, private sector contributors constituted 64.5 per cent, public sector 34.7 per cent, while the self-employed fell below one per cent.

We simply cannot have a social protection system that protects only 1.7 million workers and neglects close to 10 million others in the informal sector. And so with this programme, our target is to bring in one million people after one year,” he said.

That, Dr. Ofori-Tenkorang explained, would help reduce poverty and over-dependence on family relations and friends for support during old age.

The General Manager of SSNIT in charge of Benefits, Robert Owusu Sekyere, said the trust was determined to increase the number of insured persons to provide income replacement for every worker in the country.

That is why we are now paying more attention to our friends who are self-employed. The feedback we receive clearly shows very little understanding among players in the informal sector of how the SSNIT scheme operates,” he said.

Sekyere also said there was an erroneous perception that people lost the value of their money when they insured their future incomes with SSNIT.

He said it was for that reason, among others, that SSNIT had decided to reach out and educate the people, through various channels, on the benefits of the scheme to encourage them to come on board to secure their future incomes.

For his part, the Minister of Employment and Labour Relations, Ignatius Baffour Awuah, lauded SSNIT for the initiative.

According to him, a recent study conducted by the ministry indicated that one of the main areas workers spent their disposable income was on their aged parents.

Indeed, if we want to make sure that we all have good standard of living, even during our old age, then the best way is to ensure that we are put on social security,” Awuah said.

The minister further said considering the unique benefits the SSNIT scheme provided for members, it was important for the self-employed to join the first-tier scheme.