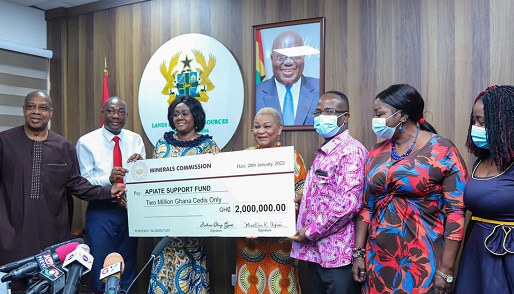 The Minerals Commission has donated GH¢2 million to the Appiatse Support Fund.

The fund was set up by the Minister of Lands and Natural Resources, Samuel Abu Jinapor, on the directive of the President to help restore livelihoods and reconstruct the Appiatse community, which was ravaged by an explosion on January 20 this year.

Gyasi said the donation was to support and ensure the speedy reconstruction of the Appiatse community.

The people are going through hard times, and we cannot look on without helping. We made this donation to ease the work of the committee,” she said.

She reiterated that as a regulator of the mining industry, the commission would do all things possible to facilitate ongoing investigation into the causes of the explosion that claimed at least 13 lives.

The former Tourism and Culture Minister assured the public that the Minerals Commission would ensure that appropriate sanctions were applied after investigations into the incident were concluded.

She also reaffirmed the commission’s commitment to enforce mining regulations to ensure safety at the mines.

Rev. Dr. Aryee commended the Minerals Commission for setting a good pace for other institutions and corporate bodies to whip up tangible contributions for the Appiatse Support Fund.

This donation is such good news, and I am glad that the Minerals Commission is the bearer of this good news. We want the reconstruction of the community to happen as quickly as possible, and this gesture by the regulator is a major boost,” she said.

Rev. Dr. Aryee appealed to the people of Appiatse to remain calm while the committee mobilised resources to help restore their livelihood and rehabilitate the community.

The government launched the Appiatse Support Fund to mobilise funds from the public and institutions to reconstruct the Appiatse community, which was destroyed by the January 20 explosion.