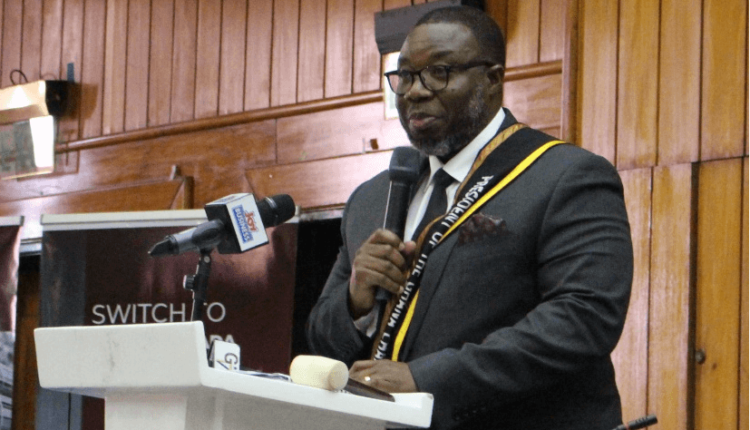 The Ghana Chamber of Mines has elected and inducted a new President, Mr. Joshua Mortoti, Executive Vice President and Head of West Africa for Gold Fields.

Accepting the mantel of leadership, Mr. Mortoti expressed the hope that the mines would continue to work together “to drive the agenda of a responsible and sustainable mining in Ghana that provides enduring value to our host communities, government, and our investors.”

He stated that taking up such a role in these times of global uncertainty coupled with domestic socio-economic challenges “is quite a daunting task, but surmountable with the support of every one of you within the industry. It is therefore an honour and pleasure to serve as the President of our beloved Chamber and to lead its engagements and advocacy for the next two years.”

Handing over the baton to the new president, Immediate Past President, Eric Asubonteng said “my 4-year tenure as the 38th President of this Chamber has provided me with the opportunity to steer my passion and that of my colleagues to bring about positive and instrumental change in the mining sector.”

Asubonteng said “My time as President has been an instructive journey and has afforded me the opportunity to influence “big picture” initiatives in the industry.  The experience and lessons learned are ones that will serve me well, beyond my tenure as the President of the Chamber.”

He further assured the new President, Mr. Mortoti and the Chamber of his continuous involvement and support.

Joshua Mortoti is a Mechanical and Mining Engineer with over 26 years’ experience in the mining industry. His areas of expertise include managing mine operations, engineering, strategic planning and business development.

Additionally, he is knowledgeable in energy management and accounting. He joined Gold Fields in April 2021 as Vice President – Operations for the West Africa Region and became the Acting EVP and Head of the Region on 1 January 2022.

Mortoti was also the Business Development Manager for AngloGold Ashanti’s West Africa operations. He previously served on the technical committees of Ghana’s Public Utilities Regulatory Commission, Ghana Standards Board and the Energy Commission. He was involved in developing Ghana’s power regulatory framework and led the technical team to define guidelines for bulk customers and tariff setting. He was formerly the Chairperson of the Energy and Technical Committees of the Ghana Chamber of Mines.

He is the first Ghanaian to head Chirano, bringing with him over 20 years of gold mining and processing experience and an impressive record of accomplishment from within Ghana and globally.

Before joining Chirano, George was the Process Director, Nordgold SA, Bissa/Somita/SMD Lefa Gold Mine. George has also spent a considerable time of his career with Gold Fields Ghana Limited, Tarkwa Gold Mine, rising from Production Superintended to Metallurgical manager over a period of 11 years.

Angela List is the Chief Executive of Nguvu Holdings, a group of mining companies in West Africa. Prior to this, she has been the Executive Director of the BCM Group, a group of mining contracting companies, in charge of Finance and Administration for over 25 years. She also worked with KPMG where she distinguished herself and at that early stage of her professional career, led teams and successfully carried out assignments on of some of the major Ghanaian and international companies, including financial institutions.

Angela has built most of her professional career within the mining industry and is a highly regarded figure.

She was solely responsible in successfully engineering a small family-owned private enterprise which had little or no access to raising equity capital to increase its total asset value of about US$ 21 million in 2001 to over US$ 750 million. In the same manner, revenue skyrocketed from about US$ 20 million to over US$ 500 million under her steady leadership. Angela was also instrumental in driving the expansion base of the company across the African sub-region.

In 2016, Angela decided to move from contract mining into owner mining. The mining businesses under Nguvu Holdings were therefore established to acquire, own, and operate mining rights. Nguvu Holdings currently operates and manages mines in Ghana, Mali, and Niger, with advanced projects in Ghana and Burkina Faso and exploration permits in Cote d’Ivoire and Liberia.

The success of Angela has not only been in her ability to raise finance but also in her ability to manage the funds in such a manner that repayment of loans is entirely satisfactory to the group’s financiers. She has built trust among financiers and other stakeholders. Angela has very good relations with government authorities and local communities.

Angela holds a Bsc. Business Administration from the University of Ghana, Legon, a  PLD Program at the Harvard University, and an Executive MBA from the Manchester University in the United Kingdom.

Angela is also a family woman and a mother of two lovely children.