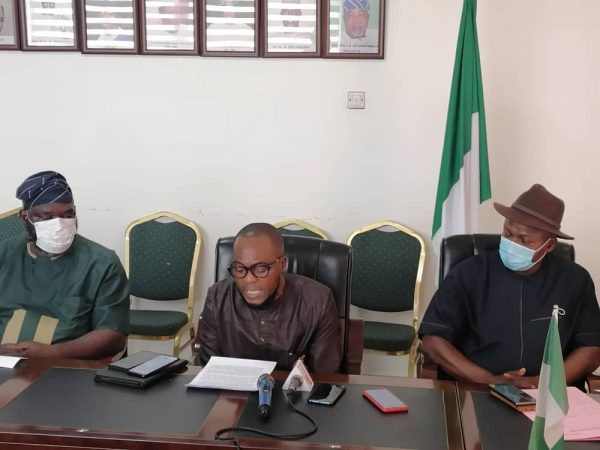 The Ghana chapter of Nigeria In Diaspora Organization (NIDO), has called on authorities in Ghana to compel one Kwaku Annan – a journalist with Net 2 Television (NET2 TV) and NET2 TV, an Accra Based television station to retract statements recently made on air to the effect that Nigerians in Ghana are behind criminal activities in the country.

They also want the journalist and the station to desist from making similar inciting utterances henceforth “as such utterances are capable of causing untold pain, agony as well as apprehension to the law abiding Nigerians living in Ghana while turning Ghanaian brothers against Nigerians”.

In a viral video cut out of the SEAT SHOW on NET2 TV and currently circulating on social media platforms, Kwaku Annan is heard calling and accusing senior Ghanaian police officers of being on the payroll of notorious criminals in the country, claiming further that it is the reason the police are unable to take any action against the criminals.

Kwaku Annan alleged strongly that “Top Nigerian criminals in Ghana have defrauded a lot of people including using the name of the Republic of Ghana to dupe foreign multinational companies and collected their monies in the name of Ghana, to create the impression that it is the government of Ghana that is securing the money, but No! It is the notorious criminals that use people to withdraw the monies from the bank.”

He gave names as Odugba Benson whom he described as one of the notorious criminals on a wanted list in Nigeria but has found Ghana as a safe haven and is being treated nicely by the Ghana Police Service “Because he pays some of the police officers”. He also mentioned names like Efe Odugba and Innocent whom he claimed are notorious criminals but receiving serious protection from the Ghana police because they have ways of making top police officers in the country feel good.

“There is a group by this same Nigerians named Great Men Progressive Club. Ghana Police do you know this club? I know you know them. What they do is to hack into bank accounts of corporate organizations and individual bank accounts and at the same time breaching data protection regulations, and many other things,” he stated, among other serious allegations.

But at a press conference at the Nigerian High Commission on Monday, members of the Ghana Chapter of NIDO said they are alarmed by the “unsubstantiated and inciting utterances” of Kwaku Annan on NET2 TV’s “SEAT SHOW” against Nigerians in Ghana. They believe Kwaku Annan is using the platform offered him as the host of the show to stoke xenophobia against Nigerians.

“…It is patent error for Mr. Kwaku Annan to use the media to be outrightly speculative by alleging that most crimes in Ghana are perpetrated by Nigerians as crime has no nationality. We don’t also believe in collective guilt and to impute that because a Nigerian was involved in a crime, then it translates that all Nigerians have criminality in their DNA is rather preposterous and contrived. Is it now a crime to be a Nigerian? It is an affront, however, to criminalize our nationality with negative narratives. It is a crime to make false, and inciteful statements capable of putting the lives of law-abiding Nigerians in Ghana at serious risk,” stated Rev. Tonywhite Meribe, Secretary to NIDO.

The organization believes that Ghana has functional institutions of high repute, a competent police service that will not permit criminals to have a field day on the streets of Ghana, and that irrespective of their nationality; people found guilty of crime by Ghanaian courts of competent jurisdiction should be appropriately prosecuted.

“This has been the position of the Nigerian High Commission who often admonishes Nigerians in Ghana to be law abiding,” Rev. Tonywhite stated.

Nigeria and Ghana’s relations predate independence and has enabled various forms of exchanges and cultural ties, cross border trade, marriages, among others. The two brotherly countries have for long enjoyed robust relations and so NIDO is of the view that it will be in the best interest of Nigerians and Ghanaians not to peddle disharmony that threatens this long existing ties between the two nations by fanning the embers of hatred capable of causing mistrust between Nigerians and Ghanaians.

Below is the video in circulation: