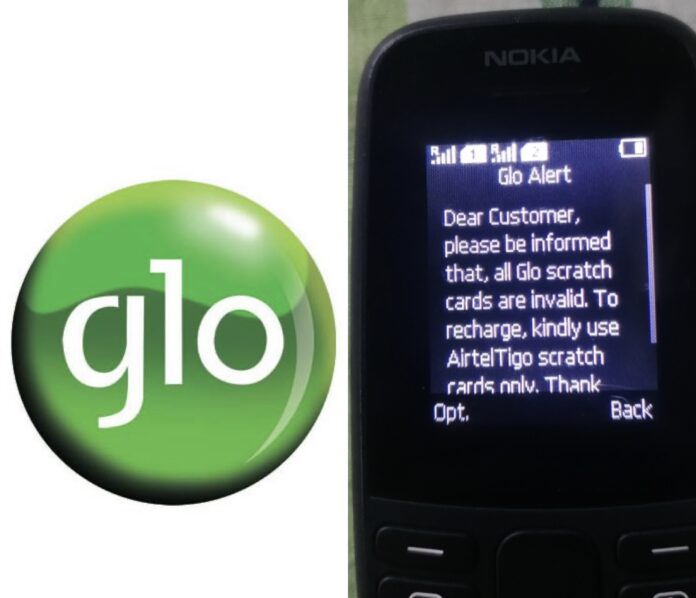 Glo customers in Ghana are now unable to load airtime from Glo recharge cards because the cards have been rendered invalid without prior notice to customers.

A Glo customer wrote to Techgh24 today, complaining that he only found out the recharge cards were invalid after he had bought one and tried to load it.

Upon trying to load the card, he got feedback which read as follows:

Meanwhile, when the customer reached out to AirtelTigo to find out how they could recharge the Glo scratch cards they already have in their possession, he was told that AirtelTigo is now working on how to make that happen.

Techgh24 also gathered that as of last week, AirtelTigo (instead of Glo) have reached out to some vendors and informed them of completely migrating all Glo customers to their core network, which means all electronic services on Glo are being shut down. All this has happened without prior notice to customers.

It would be recalled that Glo Ghana, on April 23, 2022, migrated all of it 800,000 plus customers to AirtelTigo claiming it was part of national roaming arrangement.

But industry analysts debunked the national roaming claim, saying that the complete migration of customers pointed more to acquisition or a merger than national roaming.

This new development about invalidating Glo scratch cards clearly vindicates the notion that Glo and AirtelTigo are merging.

Staff left in the woods

Meanwhile, it appears that apart from customers, even the staff of Glo Ghana, particularly the Ghanaians, have also been left in the woods, while over 90 expatriate staff, comprising of Nigerian, Ivorians and Indians, have been moved to Nigeria, except for about six of them who are here to help complete the merger.

Their monthly salaries are being paid, but other benefits – mainly free calls and free data have been suspended beginning November 1, 2022, indicate a journey to the end.

Techgh24 has gathered that the owner of Glo Ghana, Dr. Mike Adenuga Junior and his lieutenants in Ghana have not bothered to give any official information about his intentions to the Ghanaian staff since the migration of customers to AirtelTigo.

Following the migration, senior staff at Glo Ghana were asked to park their official cars and working tools, at designated places, but they were not told anything further about the way forward.

After months of enduring the deafening silence from the founder and his skeletal team in Ghana, the staff sought audience with the Director-General of National Communications Authority (NCA), Joe Anokye, and later with the Minister of Communications and Digitalization, Ursula Owusu-Ekuful, but to no avail.

At both NCA and the Ministry, they were asked to submit their complaints to either the secretaries or personal assistants of the top official, which they did, but nothing became of it.

In fact, one top official was said to have retorted that “I don’t want trouble o!”

The Glo staff were therefore left with no choice than to go to the National Labour Commission, where specific directives were given to the management of the company with regards to following due process in laying off workers, but till date nothing fruitful has become of that either.

As a result of the feet dragging, by Glo management, the staff through their representative, UNICOF, petitioned the Chief Labour Officer (CLO), at the Labour Department, and the CLO directed the management of Glo, as a matter of urgency, to begin negotiations with the workers, at the NLC as per the Labour Law.

But till date, the Glo management are still dragging their feet, so the staff, are now left with no choice than to speak out on the matter, particularly under these harsh economic conditions, characterized by skyrocketing food and fuel prices, and the scandalous free fall of the local currency.

It would be recalled that Techgh24 reported, quoting deep throat sources, that the Glo migration to AirtelTigo was on the direct instructions of Dr. Adenuga, after he held a meeting with some very top government officials about some merger and shareholder deal involving AirtelTigo, Glo and Ghana Telecom (Vodafone Ghana).

Months after Glo migrated its customers to AirtelTigo, it emerged that Vodafone Ghana had agreed to sell its Ghana operations to Telecel Group, but the deal was in a limbo.

Later on, the Minister, Ursula Owusu-Ekuful also stated in another forum that Telecel lacked the technical capacity and financial muscle to takeover and run Vodafone Ghana.

So, it became apparent that government had found reasons why the Vodafone-Telecel deal could not be allowed to happen.

Meanwhile, Techgh24 had gathered that government was only buying time till close of this year, when Vodafone will walk away without renewing its license in Ghana, so that government, being the minority shareholder in Ghana Telecom (Vodafone Ghana), would become the de facto owner of all the shares, so it can exact its AirtelTigo-Glo-Vodafone merger.

The idea is to create a formidable competitor for the runaway market leader, MTN Ghana, in a duopoly.

Meanwhile, the Glo staff have not been told officially what Dr. Adenuga’s actual intentions are, and they have been left hanging till date after being asked to park their official cars and working tools.

Related Topics:GloUrsula Owusu
Up Next