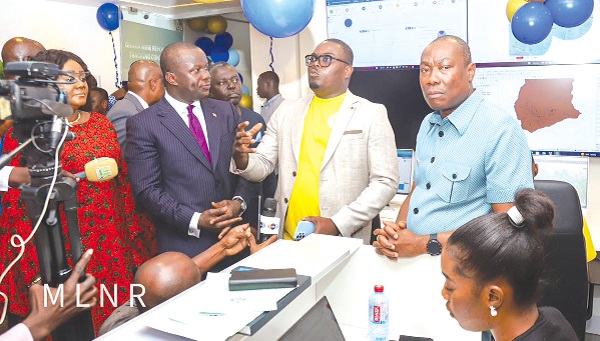 The Minister of Lands and Natural Resources, Samuel Abu Jinapor, has inaugurated the Ghana Mine Repository and Tracking Control Centre, a situation room meant to track the movement of earthmoving equipment in mining concessions.

The facility, located at the Minerals Commission, was established on the directive of the minister as a measure to track all excavators that are used by small-scale miners for mining operations.

Apart from tracking all excavators, the centre will also track all trucks carrying explosives, speed boats used by river wardens, and monitor quarries to ascertain the tonnes of haul each site carries out of the country.

Jinapor inaugurated the centre yesterday after a brief engagement with the staff of the Minerals Commission.

The Chief Executive Officer (CEO) of the Minerals Commission, Martin Ayisi, and the Chairperson of the Commission’s board, Barbara Oteng-Gyasi, conducted the minister round the facility.

The manager of the centre, Dr Sylvester Akpah, took the minister and other officials through the operations in the control room, explaining that the centre had three sections – explosives monitoring, excavator monitoring and call centre sections.

The excavator monitoring section has technical staff whose responsibility was to monitor the movement of excavators within the concessions they had been assigned to.

Dr Akpah said 40 excavators had so far been paired with designated concessions in the Western Region and their movements were being tracked.

He explained that at the control room, the staff were able to get relevant information on excavators including their number plates, the time they moved, the speed, where the machine had been over time, and whether it was within concession area.

“There will be a beep to draw the drivers attention once the machine is moving close to the buffer around the concession it has been paired to operate. Once the machine go out of the designated zone, it will be unable to move unless the control room assesses the situation and restores its movement,” he explained.

Touching on the explosive control section, he said three explosive carrying equipment had been fixed with cameras for tracking their movement.

He said the control room would be able to monitor the equipment from its movement point until it got to the final disposal point.

Again, he explained that the technical staff at that section would be able to monitor the behaviour of drivers of explosive-carrying vehicles and call them to order, if those behaviours were dangerous.

Dr Akpah also said the call centre section was designated to receive issues emanating from the field for redress.

Jinapor said he was “overly impressed” with the quality of work done by the Minerals Commission regarding the tracking centre.

The minister said he was, particularly, happy because the tracking technology was developed locally by the University of Mines and Technology (UMaT) using local human resource.

He urged the Commission to take immediate steps to scale-up the tracking of excavators to all parts of the country to help deal with illegal mining activities.

An intervention like this must be nationwide and must be across the board, so we must be able to give ourselves a timeline when all excavators in the country will be tracked. If we are not able to do that, this whole investment and this infrastructure will amount to nothing,” he stressed.

Further explaining the urgent need to scale-up the intervention, the minister stated: “if you track excavators which are in concessions and in the end there are other excavators that have not been tracked, an illegal miner who wants to compromise this system can bring in the untracked excavator and begin to operate.”

Jinapor reiterated the directive that all excavators be registered by the metropolitan, municipal and district assemblies (MMDAs), saying that it was crucial and useful in the efforts being made to track the mining equipment.

The minister observed that it was important for the Minerals Commission to put in place a sustainability plan for the initiative.

He said the country had not come to an appreciable stage yet in the fight against illegal mining, for which reason the initiative to track excavators must be robust and holistic enough to weed out people were still polluting water bodies and destroying lands

The minister noted that with time, and working systematically, the age-old issue of illegal mining would be addressed.

For her part, Mrs Oteng-Gyasi said the Minerals Commission remained committed to fulfilling its mandate of regulating the country’s mineral space.

She said the Commission would work with other stakeholders to ensure that the excavator tracking initiatives achieved the needed results.

Furthermore, she said the Commission would continue to revamp intervention programmes such as the community mining scheme and the reclamation project under the National Alternative Livelihood and Empowerment Programme (NAELP) to restore degraded lands and restore livelihoods to people affected by illegal mining activities.