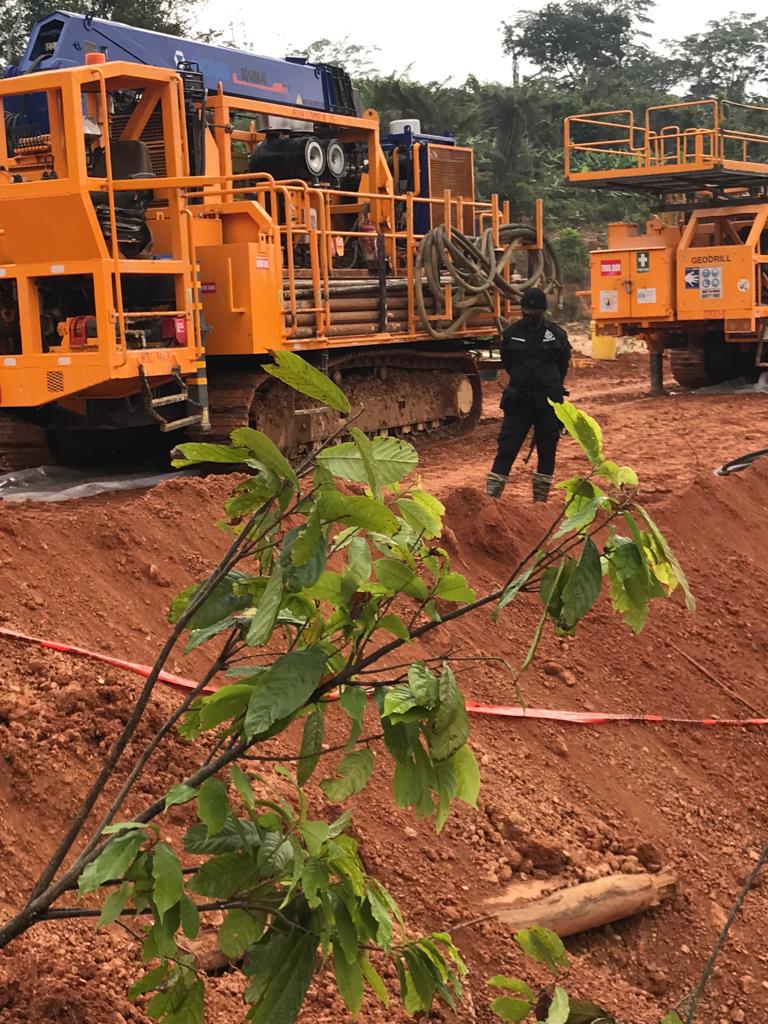 …Over Her Refusal To Give
Out The Land For Minin

A widow, Madam Esther Konadu, who is also a farmer in Denkyira Breman in the Central Region, is being hounded again by Perseus Mining (Ghana) Limited (PMGL) for her five (5)-and-a-half acre farmland.

According to reliable information, the mining company is using the police in Dunkwa-on-Offin to achieve their aim. 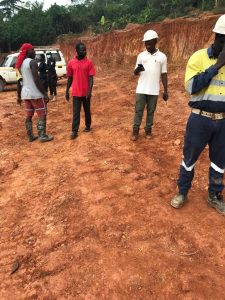 On Thursday, December 15, 2022, around 6:00 p.m., Madam Konadu’s pain reached its unbearable limit when about seventeen (17) fully armed to the teeth police personnel from the Central Regional Police Command stormed her farmland, and offered protection for staff members of the mining company to fill the land with laterite.

But for the help of a community member, who hinted Madam Konadu’s family of the ongoing operation, her whole farmland would have been covered with laterite.

Even at that and with the protection of the armed police officers, the mining company managed to fill a portion of the widow’s land with laterite, leading to the destruction of her pineapple plantation.

Together with some community members, Madam Konadu on Friday, December 16, 2022, stopped staff members of the mining company from undertaking drilling works on her farmland

This is not the first time Madam Konadu, whose late husband (Kwadwo Konadu) died under very strange circumstances, is having to face off with the mining company.

Some of the community members contended that the presence of the police sent shivers down the spine of the entire town. 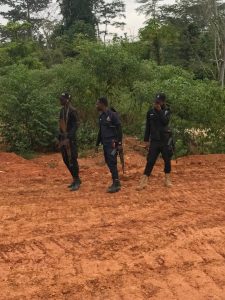 Narrating her chilling ordeal to journalists on Friday, December 16, Madam Konadu, said after getting wind that some police personnel had invaded her farmland on Thursday evening around 6:00 p.m., and were protecting an excavator and bulldozer operators to ravage her farm, she together with some of her family members and some sympathisers rushed to the land.

When we got there, we saw police officers wielding guns on my farmland. So I quickly asked them their mission on my property. And their response was that they have been deployed by the Central Regional Police Command to come and offer protection and security to staff members of PMGL,” she said.

After hearing the response of the police officers, Madam Konadu stressed that she bluntly told them that the land in question was her bonafide property and that there was no way she will give or sell it to the mining company.

She said with the assistance of the Diaso Police Commander, they were able to stop the operation on her land on Thursday evening.

But unbeknownst to us after we stopped them from working and left, the 17 police officers guarded them to cover a portion of my land planted with pineapples with laterite.

“…and as we speak now, loads of my pineapples have been destroyed by the mining company,” she noted.

However, Madam Konadu underscored that she will use all appropriate means to fight the company from taking her land.

This is my land, my property and I and my family will not allow Perseus to take it. We will use every legitimate means possible to possess what rightfully belongs to us,” Madam Konadu averred.

She, therefore, called on duty bearers to stop the mining company from illegally taking over his land.

Some of the community members told the journalists they believe the Dunkwa-on-Offin Police Command was in league with the mining company.

Meanwhile, the farmers in the town have offered their unwavering support to Madam Konadu, asserting that they will resist any attempt by Perseus to take Maame Konadu’s land. 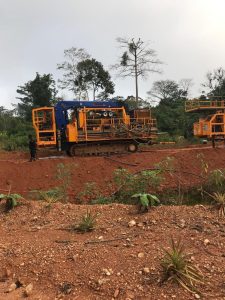 The Chief Farmer in Denkyira Breman, Opanyin Bojers, who spoke on behalf of the farmers mainly (cocoa farmers), asserted that they will go the extra mile to prevent Perseus from taking possession of Madam Konadu’s land.

It would be recalled that on 15th March, 2022, through this same land matter, Perseus got Madam Konadu and her three adult daughters and a 10-month-old baby behind bars.

That action by the police at Diaso received a lot of bashing from a section of Ghanaians.

CEO Dialogues: You can grow in these trying times – Dr. Ishmael Yamson